Is it Time to Turn that Extra Space Into an Office?

Analysis of What The Future Holds for House Prices Under Biden

We are writing this article only a few hours after Biden was declared a clear winner in the US elections.

Biden shrewdly kept his campaign focused on the pandemic and his opponent’s perceived shortcomings instead of talking much about his own policies. This ducking and diving might have been hated by the conservative press, but was obviously a big hit with the voters.

However, it’s Biden’s economic policies we want to look at more closely here, especially after the Hoover Institution’s study showed some of his proposals could have a damaging impact of household median incomes, job creation, and widespread economic growth. Is this what could impact house prices under the new Democratic government?

Most politicians break their campaign promises; case in point: Trump’s infamous “build that wall” slogan. Most market forecasters know enough about empty political promises to not take the most outrageous one’s at anything other than face value. The left are saying that Biden will come through on his comprehensive and inclusive housing plan, while the right say that all it will do is throw money at the problem without offering any real or practical solutions.

Let’s look at how Democrat rule has affected house prices in California, and compare it against that bastion of conservative representation, Texas. The same federal obligations existed for the last four years in each state, but as you can see, the house price trend shows growth across the board in both states since the 2008 recession.

The California Association of Realtors has been quick to promote the recent surge in house prices and sales, but this has nothing to do with policy, and everything to do with interest rates dropping post-Covid and a shrinking inventory.

Texas, on the other hand, shows this on the chart: 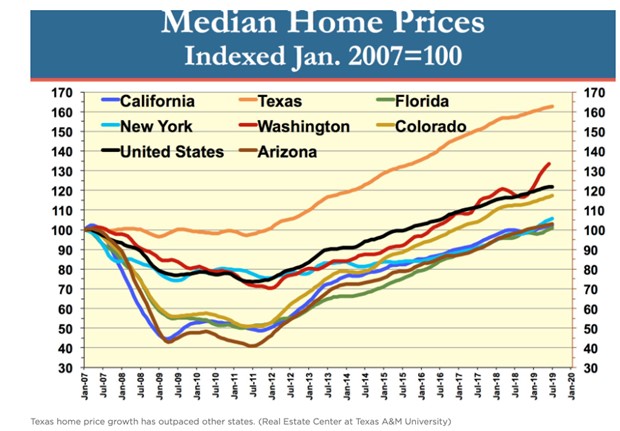 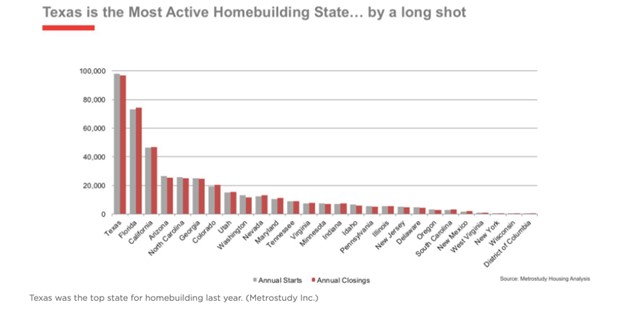 Is it possible that no matter who is President of the United States of America, it doesn’t really impact house prices on a state level at all, no matter what house price-related economic policy they used to get elected?

While on his campaign trail, Biden cited Moody’s credit-rating service as saying his plan for economic recovery is going to yield more jobs and faster growth, but it will be a while before we are able to tell the difference between his economic policy implementation and the country’s natural post-Covid growth spurt.

Economists use government spending and consumer demand as the main constituents of economic growth patterns, and this includes house prices. But this could lead them into underestimating the importance and impact of tighter regulations and higher tax rates that Biden’s economic model promises to include.

Trump predicted an American depression if Biden won, but even before he made that statement data was already coming in showing the US economy was recovering from the Covid-19 shutdowns much faster than anyone could have predicted. In effect, Biden is inheriting a strong growth momentum economy.

How a vaccine will change house prices

The housing market boomed before the election – yet another indication that small business sentiment was bullish no matter who won. Manufacturing was also on the rebound, and once a vaccine is approved and distributed, then the economy will really take-off. This is because previously recalcitrantly obstinate Democrat governors can ease lockdown regulations with no fear of being called diversionists.

The Federal Reserve has vowed to keep interest rates low for as long as possible, so all Biden is really doing is inheriting a boom economy – not so much from the efforts of the previous President, but more because the post-Covid landscape demands it. This should last at least until 2022.

There are concerns, however, the Biden’s policies might not nurture this predicted strong recovery, but rather slow it down in the same fashion as Obama’s did after the recession in 2009.

The previously mentioned Hoover study examined Bidenomics closely for any incentive and supply fallout. If Biden implements his agenda completely, the study predicts the following economic repercussions over the next eight to ten years:

The Hoover study is definitely worth taking a second look at now, in light of Biden winning the election. It is to be hoped there won’t be a return to the Obama-style era of regulation in the house sector, and that he implements the most beneficial of his comprehensive plans instead.

Part of his proposal to reinstate Obama-like regulations that will require communities to mitigate unfair housing practices alongside the expansion of housing choice vouchers and state-wide government assistance for the planning of affordable housing units. These promised changes might take a while to be put into practice.

In conclusion, it’s best to predict that house prices will continue to rise as interest rates stay low in a post-Covid, President Biden U.S.A.