Do Giant Retail Companies Contribute to the Rise in Property Prices More Than Car Companies?

It comes as no surprise that China prefers the idea of the Renminbi (people‘s currency) staying inside homeland borders where they can keep an eye on it. Back in 2018 already, China began constricting capital outflow with a beady eye on maintaining yuan stability. So, it must come as no surprise that the figures for real estate sales in the U.S. show a downturn.

China’s latest attempts to restrict investment outflow by its more globally-conscious residents indicates just how nervous the world’s second largest economy’s policymakers are regarding possible capital dispersal. It is one of the main catalysts spurring on the Sino-U.S. trade war.

Despite the Trump-Xi Jinping trade truce agreement made in June 2019 this year, the two leaders always seem to back-pedal enough to make the Dow extremely skittish. When the People’s Bank of China reset the yuan’s daily reference rate on August 5 this year, it was below 7 per dollar for the first time in over ten years. Welcome to China’s response to the new tariffs imposed by the current U.S. administration.

Set to leap into effect on September 1, 2019, the 10% tariffs hike on the $300 billion worth of Chinese imports is a move guaranteed to spark a similar retaliation from China. Global markets galvanized into sell mode at the news, which saw the Dow lose nearly 3% in its worst day of trading so far in 2019. 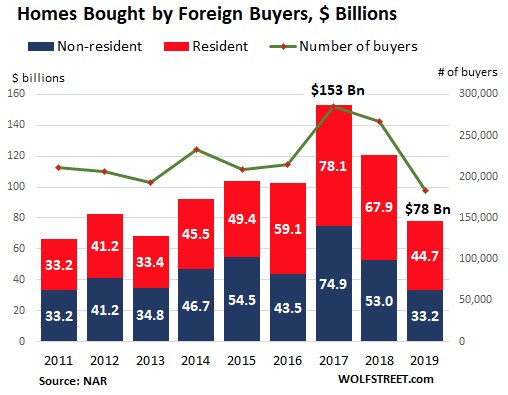 According to the NAR (National Association of Realtors) International Transactions Report for 2019, there has been a dollar volume of $77.9 billion foreign buyer residential purchases made from April 2018 last year, and March 2019 of this year. The figure shows a 36% decrease in sales from the previous year (April 2017 – March 2018: $121 billion).

A foreign real estate investor is defined as:

From April 2018 to March this year, 2019, the greatest number of foreign real estate buyers for residential properties were from China, Canada, India, the U.K. and Mexico. They accounted for 5% of the dollar volume of $1.57 trillion of the existing residential sales made during that period.

What’s the Sino-U.S. Trade War All About?

China claims their currency devaluation is to maintain prudent economic stability. The U.S. sees this move through an entirely different pair of spectacles, however. On August 5, this year, the U.S. Treasury Department officially stated that China is a currency manipulator.

This is a more of a symbolic move, but it the first time the United States has taken such action since 1984. By calling China out in such a way, it opens the door for the U.S. to consult with the IMF (International Monetary Fund). Steps can then be taken to abolish any unfair advantages China, and its devalued currency, may have gained.

Is the Trade War the Real Reason Behind the Drop in Foreign Residential Real Estate Purchases in the U.S.?

Many other factors should be considered before blaming the Sino-U.S. trade war for the precipitous drop in foreign residential real estate sales in the U.S. The news and press in the U.S. seem to have lost all reasonable judgement and rational thought in their rush to portray the current administration in a bad light. This could be a salient fact in the drop in foreign residential purchases.

Another contributing factor could be that recent spate of U.S. violent crimes that have gained traction in global headlines. These could be the difference between a Chinese national deciding to buy property in the United States or preferring to play it safe and buy in Australia or New Zealand instead.

There is Good News for the Housing Market

The good news for the housing market in the United States is that halfway into 2019, it’s still holding up nicely. Despite the cloud of uncertainty created by the sharp rise in inventory, home price gains shrinkage, and talk of more rate hikes, the sky didn’t fall in as some people predicted.

According to statements made by the Chief Economist for the NRA, the housing market is doing just fine, thank you very much. It may have been showing signs of softening in the first quarter of 2019, but the historically low mortgage rate is doing its job in holding the market steady.

The only drop in house prices were seen in areas that were due for a correction anyway. Seattle and San Francisco experienced a two year house price growth acceleration between 2017 and 2018 that was out of proportion with the rest of the country. Then in April last year, 2018, the year over year price hikes began to change.

By April 2019, San Francisco and Seattle house prices had shrunk from 13.8% growth (Seattle) to a zero flatline, and 10.9% (San Francisco) to 1.8% annual gains. These snapback house prices reflect a healthy attitude homebuyers have about taking advantage of the 4.09% mortgage rate. As potential buyers keep a weather eye about the possibility of house prices becoming even more affordable, the market will reflect their cautious optimism.